Summer is synonymous with baseball, and this summer, a number of our Sports Broadcasting majors are interning with collegiate baseball leagues around the country. From Cape Cod to Palm Springs, we caught up with a few of them to find out how their seasons are going.

Live from the West Coast 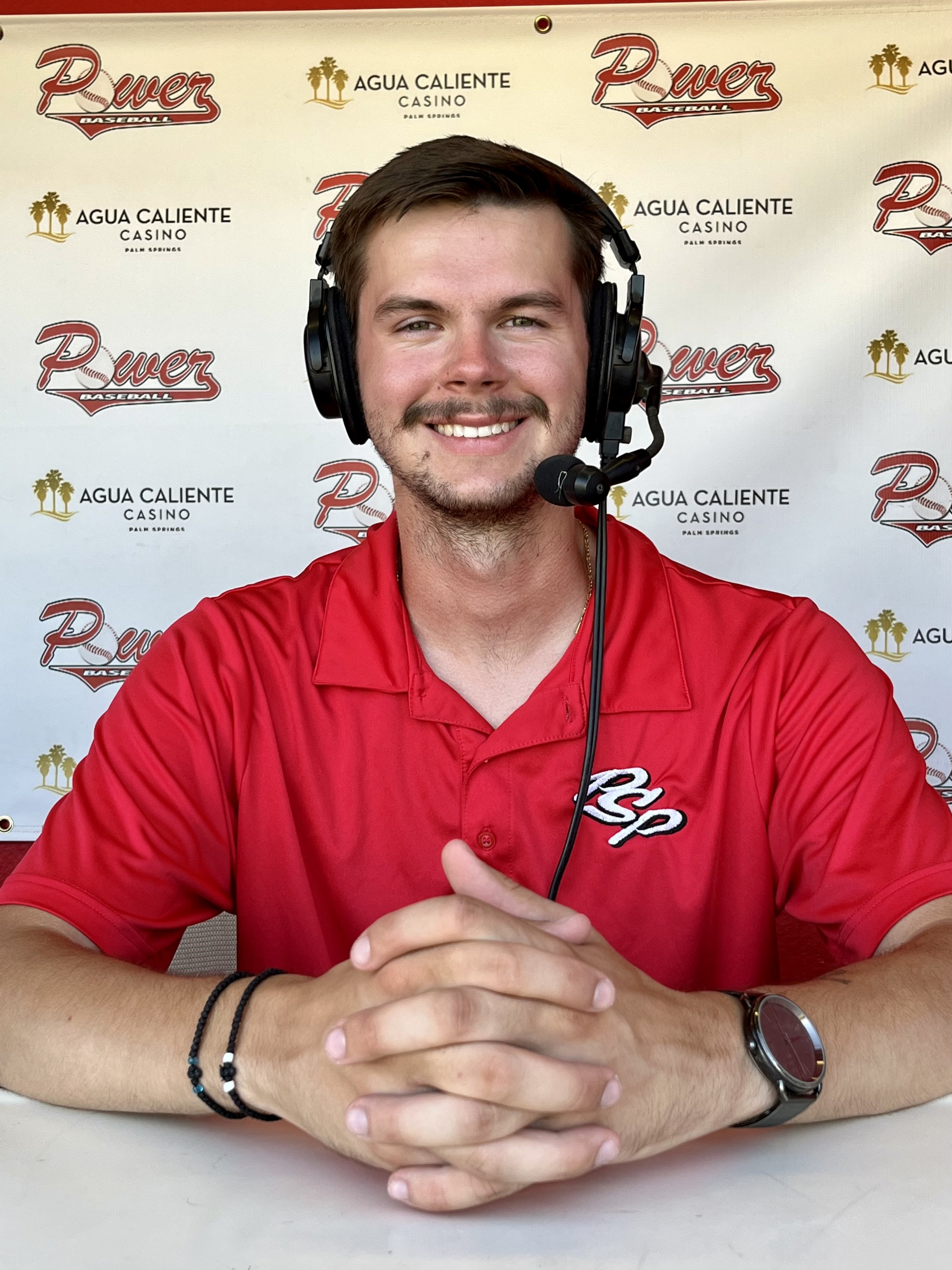 This season, George Hathaway ’23 is the play-by-play broadcaster for the Palm Springs Power in Palm Springs, California. With a range of responsibilities from setting up equipment and producing the broadcast to doing interviews with players and writing postgame articles, George arrives a few hours before first pitch to get a typical game day started. “I talk with both teams’ coaches on their lineups and get insight to use for the broadcast,” he explained. “I get the broadcast all set up and ready for first pitch, and I coordinate with the marketing team to make sure we have graphics ready.”

Of course, every game is different – and so is the work he gets to do. “The coolest thing I have done in my internship is working with NBC Palm Springs to create a field package about the Palm Springs Power,” George said. “I was able to work with a real production crew and have the opportunity to be on TV. I was also able to see what it is like behind the scenes to get our field package on air in a real-life news studio.”

Back for season two 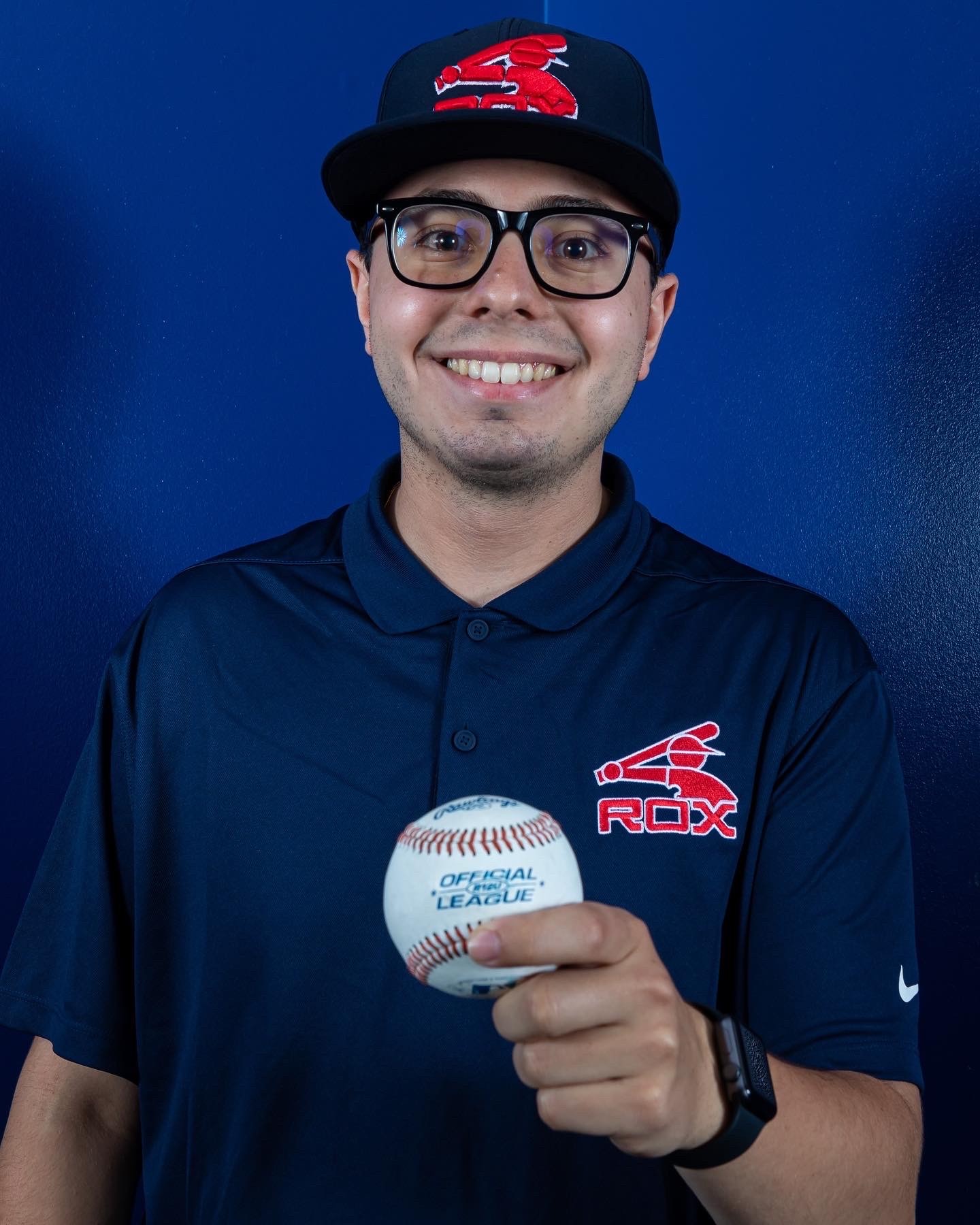 Last summer, Brett Chaves ’24 was one of three Dean interns at the Brockton Rox in the Futures Collegiate Baseball League of New England. Back for his second season with the Rox, Brett is now the play-by-play voice and the director of broadcasting for the team. “Within the last two seasons with Brockton, my role has grown tremendously,” he explained. “In my first season, I was solely in charge of a one-camera broadcast with an audio board and an older computer. This season, I have been able to expand our broadcast to three cameras, an audio board, wireless microphone system for our sideline reporter and a new computer that is able to handle all of the equipment.” In addition to upgrading equipment, Brett has upgraded his responsibilities to include all broadcast relations and media within the program, from setting up equipment to coordinating advertisement reads to managing the broadcast. He’s also stepped into a leadership role.

“I am also the leader of a broadcast team of seven, the largest the Rox have ever had,” Brett said. “It’s my responsibility to ensure my team is gaining valuable experience to take back to school or their other career opportunities. It’s been a tremendous experience helping this team grow and develop, and they have helped me grow as a leader and an individual.”

Jake Baskin ’22 is also back for season two at the Upper Valley Nighthawks in the New England Collegiate Baseball League (NECBL). As the play-by-play announcer, he calls all games, both home and away, as well as making the program that is handed out at each game and conducting postgame interviews with players and coaches for the team’s social media channels.

“Most play-by-play announcers build up their careers by working with a team,” Jake explained. “The college summer baseball leagues are a great way to get that experience and learn the minor league lifestyle—moving away from home, riding the buses—and that is evidenced by the number of Dean students, current and former, in similar roles to mine this year. Working in the NECBL has also improved my networking and interviewing skills, both with members of the team and with other broadcasters.”

He's not only grateful for the experience he’s gaining, but also for the relationships he’s building along the way. “The quality of the play in this league is amazing, but the players are just regular college students, just like the athletes I interacted with at Dean,” he said. “And what I've found to be the most rewarding part of the two years I've spent in the Upper Valley is that the players seem to feel like I'm a part of the team as well. I show up at every game and go to and from games with the guys. I have dinner with them after games and play Mafia on the bus with them. They've gone out of their way to make me feel included, and I can't ask for anything more than that.”

Ahead of the league 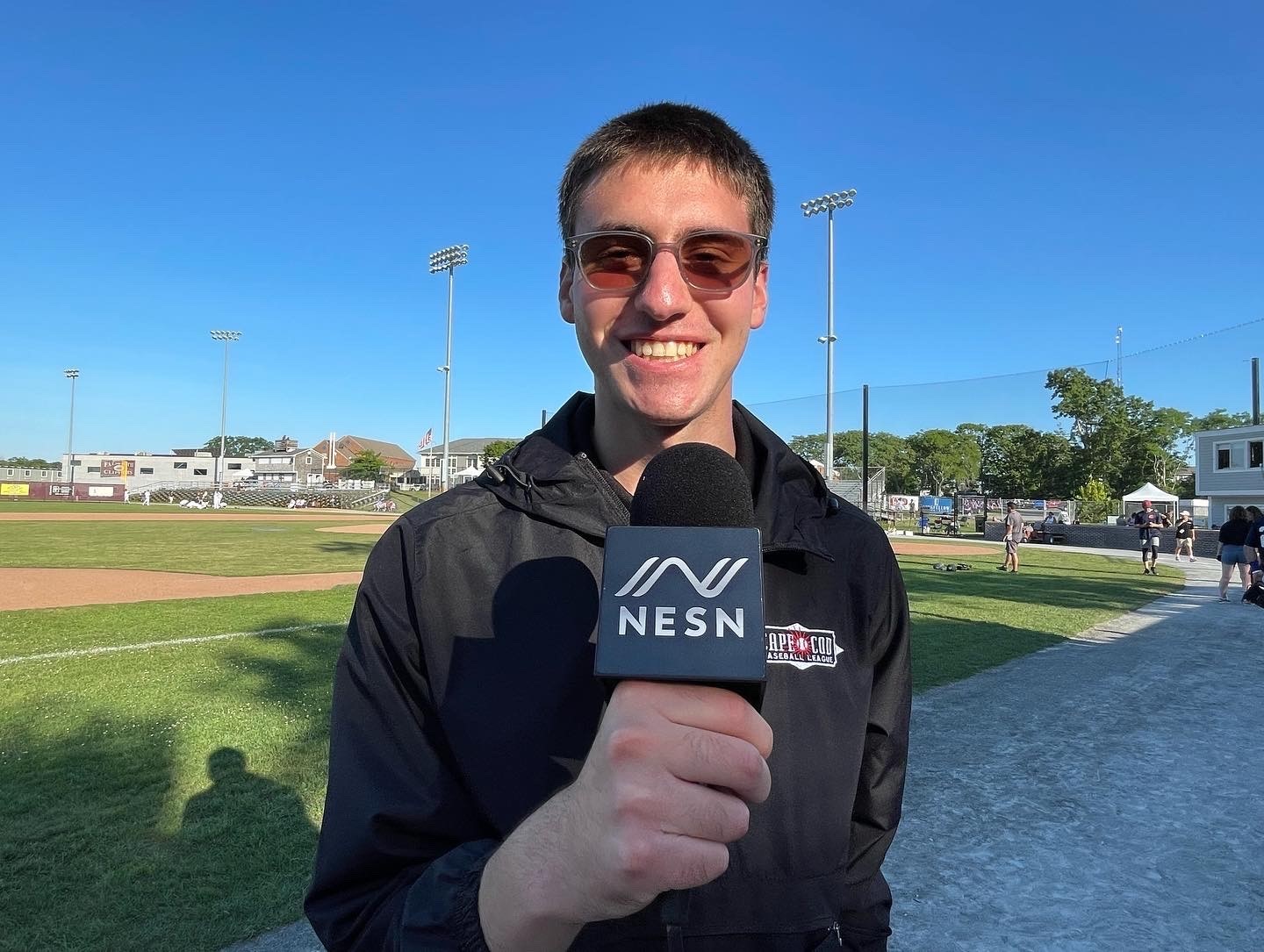 While most students are interning with one specific team, Reed Becker ’24 is a broadcast intern for the Cape Cod Baseball League, a premier collegiate summer league consisting of 10 teams across Cape Cod.

“I interview players and coaches, as well as give a pre-recorded one-minute report of the scores for the day and the games for the next day,” he said. “I also give the out-of-town scores on the Game of the Week on 96.3 WEEI.”

While these are typical tasks for game days, Reed has also had the chance to work on some pretty unique opportunities, like covering the Cape Cod Baseball League Tryout Day at Fenway Park and interviewing baseball media personality Peter Gammons.

Skills that started at Dean

All of the interns credit their experiences at Dean for helping them get where they are today. Versatility, networking, confidence, teamwork, the technical knowledge needed for a broadcast – these are just some of the skills and abilities they’ve learned from Dean. “My experiences with Dean, including the Sports Broadcasting Pre-College Summer Program and being an Assistant Sports Director on the Sports Broadcasting team, have put me above and beyond where I needed to be for this position,” Brett explained.

It's also paid off in helping them get – and succeed – in their roles. “Teaching me to do a little bit of everything has made me a better broadcaster and employee that more companies and teams want to hire,” George said. Jake agreed: “Dean has really helped my knowledge of both what goes into a broadcast and working within a team setting. Now in my second year with the Nighthawks, I am a much more confident and prepared announcer in large part because of my two years at Dean.”

At Dean College, 100% of students complete an internship – and quite a few of them are participating in internships this summer. Learn more about internship opportunities and Sports Broadcasting at Dean.