The Dean College Board of Trustees is proud to announce Edward M. Augustus Jr. to the newly formed position of Chancellor. Augustus, the former City Manager of Worcester, Massachusetts will be on campus starting July 5, 2022.

As Chancellor, Augustus will report directly to the Board of Trustees and work closely with newly named President, Kenneth Elmore. The two gentlemen will lead Dean College in successfully implementing its Mission and support Dean’s national recognition for The Dean Difference – the College’s distinct model for student success. 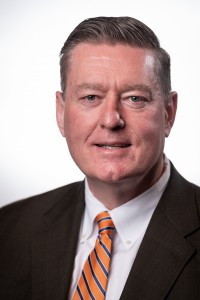 “I have had the privilege to serve as a member of the Board of Trustees for almost 10 years and have seen first-hand how special Dean is. The Dean Difference is real, and I look forward to furthering the College’s Mission now and in the future,” says Augustus.

Mr. Augustus has worked in public service for more than 30 years. He was appointed as the City Manager of Worcester, Massachusetts in January 2014. As City Manager, he focused on continuing Worcester’s economic development renaissance, supporting education and youth, and making city government inclusive for all residents of New England’s second-largest city.

Over eight years as City Manager, he led a downtown resurgence effort through the development and implementation of the Urban Revitalization Plan. He has also overseen more than $90 million in renovations and improvements to the City’s 61 public parks. Under his leadership, the City of Worcester has received the highest bond rating in its history and measured the most residents – 206,000 – in the history of the municipality.

He successfully led an unprecedented effort to sign a Letter of Intent with the Pawtucket Red Sox in August 2018 to build a modern, multi-use ballpark as part of a multi-million-dollar redevelopment of the former Wyman Gordon property in the City’s growing Canal District as well as a complete redesign of Kelley Square.

Prior to his appointment as City Manager, Mr. Augustus, a native of Worcester, served as Director of Government and Community Relations at the College of the Holy Cross.

His political career began at the age of 23 when he was appointed to the City of Worcester’s Human Rights Commission. A few months later, he was elected to the Worcester School Committee, becoming the youngest person ever to hold elected office in Worcester. He served on the School Committee for two terms, making it a point to visit each and every classroom in every school in the City every year of his tenure.

Continuing his interest in education, Mr. Augustus moved to Washington, D.C. where he worked in President Bill Clinton’s United States Department of Education from 1992 to 1998. While in Washington, one of City Manager Augustus’s major initiatives was working to close the educational achievement gaps in Latino communities.

Mr. Augustus also served as U.S. Congressman Jim McGovern’s Chief of Staff in Washington from 1998 to 2004. In this role, Mr. Augustus was involved in a host of important Worcester projects and initiatives, including the first discussions about building Worcester’s Hanover Theater, the Blackstone Valley Visitors Center, Gateway Park, CitySquare and many more.

“Mr. Augustus has a long and varied track record of success spanning public service, higher education and the private sector,” said Chair of the Board of Trustees Mark Boyce. “We are thrilled about what Ed brings to the newly formed role of Chancellor and look forward to working with him.”

Dean College was assisted in its search by Greenwood/Asher & Associates, LLC.